“Along the cliffs we followed the coast past a gorsy old hedge full of sea pinks. The wider view ahead was of long, dark lines of hedge banks running inland, cutting the coastal fields into thin segments. Out at sea ran the long bird's-bill promontory of Hook Head, its stumpy Norman lighthouse -- the oldest-operating light tower in the world -- standing isolated above white breaking waves.

Shiny black clefts opened at our feet, plunging to thick ledges of rock studded with white nuggets of quartzite. Green seas beat up into their crevices, lazily bursting in long shawls of foam, the backwash even more powerful than the initial wave. Hollow booming resounded under our boots, as if from the bowels of the ground.”

The walk starts at a small connecting bridge from the car park to the Flat Rocks and if you follow the sign you find a set of steps to take you up to the walkway proper. The Flat Rocks was originally a quarry which was used to construct the harbour at Dunmore in the 1820s and had a railway track which led from the rock fact to the harbour and along the top of the present High Wall. The walking route actually dates back to this time when workers on the harbour construction formed the path in order to go the work daily from the then sizeable communities at Portally and Ballymacaw.

The pathway is fenced and follows a defined route past some historic places of legend in the area. One of these is Bishop’s Cave which is said to be named because of its use as a place of worship in Penal times. As most Irish people will be aware it was forbidden to celebrate Mass during the period of the Penal Laws in the 17th and 18th centuries, so Catholics were driven to extraordinary lengths to practice their religion. This apparently even involved climbing down the cliff here to a ledge above the sea where Mass could be celebrated and where the priest could also arrive and leave by sea without being spotted. Afterwards the congregation climbed back up and went about their business without the authorities being aware of the event. Whether this legend is true or not is a matter of speculation but there is no smoke with fire so we can assume that there is a grain of truth in it somehow.

As you walk along the path inlets are revealed which have been carved out of the conglomerate red sandstone along the shoreline. This rock is also known locally as pudding stone and it can be seen in great quantities forming the harbour walls at Dunmore.

Birdlife is also in great evidence along the path and you may see fulmars, cormorants, herring gulls, shags and even the red legged crow like chough. At certain times of year whales can be observed along the shore. Usually these are Minke whales but occasionally the Fin whale, or even the spectacular Humpback.

There are memorial seats along this section of the walk which can be very welcome if you are not used to a path or this length but because of the popularity of the path it can sometimes be hard to find one vacant.

Arriving at Portally Cove (Port Fhalla, ‘little harbour of the wall’) you descend some steps, which definitely need an upgrade. Then on to a small bridge and up some recently installed wooden steps to a short path which connects to the main route from the road to the cove. Then you can either return to Dunmore by road or continue along the next section of the path. This ascends up another new set of wooden steps to the path marked by a sturdy fence leading to a spectacular viewing point of the Old Ship Rocks and Foilskirt Rock offshore. There are further sea caves here, but they are not very accessible.

The route continues here to Swines Head which also contained a Promontory Fort similar to the one at Shanoon in Dunmore East. The next leg of the path passes the Rathmoylan Sea Cave which is said to be the longest in Ireland at 60 metres. It was surveyed by the Geological Survey Ireland in 2011 and their description reads – “Of particular importance at this site is a superb sea cave at the eastern edge of the cove. This sea cave has eroded in underground at least 60 metres in length and is between 10 and 11 metres in width for most of its length, narrowing to 5 metres wide at the innermost part. It is around 8 metres high and has a thick conglomerate bed as its roof, therefore with an overall square profile. It may be Ireland’s largest sea cave. A second smaller one occurs just alongside and parallel to it, to the east.” It says that public access is easy and relatively safe by the beach. Access to the sea cave requires scrambling across rocks and may be only possible at low tide. The cave is also easily accessible from the path above Rathmoylan Cove but watch the tide level. 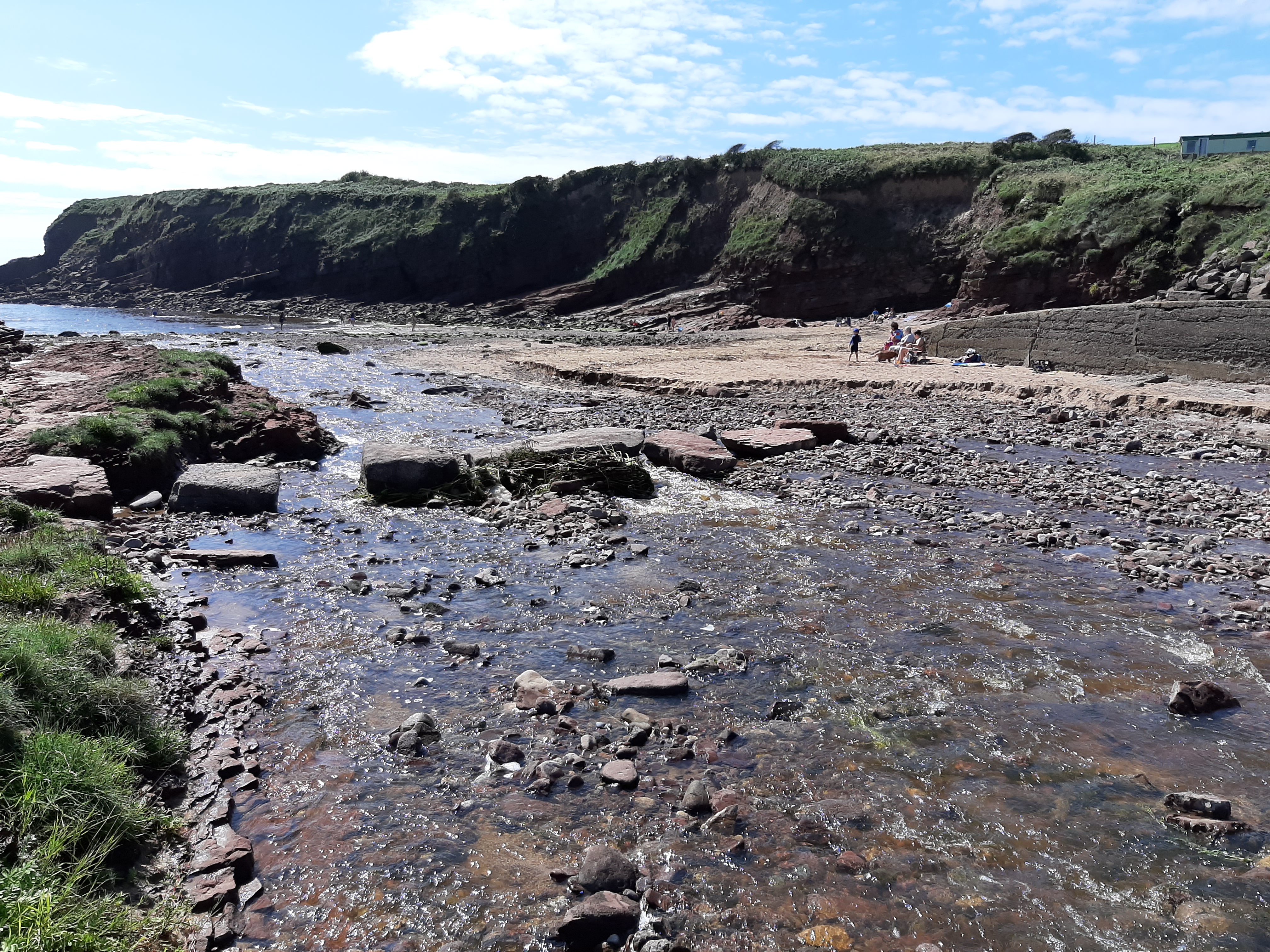 The route then continues up the seaward side of a house which starts with some very tastefully built      stone steps. At the top of the path here there is a wooden stile and then a fence to take us around the edge of a field leading to a standing stone which is also known as the “White Lady”. It is no longer white (if it ever was) but it is a very prominent feature along the path.

This intriguing figure shaped stone is almost 2 metres in height, is spectacularly situated near the cliff edge. It is orientated in a NW-SE direction.

The stone bears a resemblance to a tombstone and what it represents is difficult to say. Whether it was used as a marker for local fisherman is open to speculation, but with it’s human like appearance and unique location overlooking the Celtic sea, it could have had some other important symbolic meaning such as commemorative monument or it may have associations with someone lost at sea.  It may even be a Bronze Age menhir making it about 4000 years old and be linked to the Promontory Fort at Swines Head which dates back to the Iron Age.

The path then passes by some memorials to deceased fishermen and one to a local farmer (which is sometimes accompanied by a Munster Rugby flag). See photo.

Following the fence, we come to two small beaches (Portavodda and Portaclea) with steep accesses from the path. These beaches are not often visited by the public.

As we near Ballymacaw Cove we follow the fenced path down to the roadway and the car park. This path comes to a fork near the cove and it is easier to take the right-hand track because it is less steep. Ballymacaw Cove also has a small rock called the Boat Rock which is used for short term berthing because it is tidal. It has a bridge leading left from the cliff path.

The Coastal Path is maintained by the community. Please donate.