Marine wildlife, striking red cliffs, prehistoric sites, secluded coves and good underfoot terrain are some of the ingredients of this spectacular walk. The walk starts near Brownstown Head with its iconic twin pillars and follows the coast east. Inlets and small bays abound with names redolent of history and nature — Binngara~vogue, Portalaun, Faill na gCorc, Cloonliamgallda. William of Orange according to local legend put in for water at the latter which is overlooked at Coolum Cove headland by an iron age promontory fort. The route continue on to Ballvmacaw Cove. Continuing along the cliff we come to the remnants of another promontory fort before reaching glorious Rathmoylan Cove and its layered red sandstone cliffs and tidal pools. From Rathmoylan it's forty ﬁve minutes to another gem of a cove — Portally, ‘the cove of the wall cliff.’ From here the route along the cliff top winds its way through carpets of purple heather and yellow furze and spring time clusters of white nodding sea campion and spreading sea pinks. The rare and protected chough is sometimes seen on this stretch along with the more abundant shag and cormorant. Pause at the cliff top and take in the glidlng ﬂight of the fulmar. And ﬁnally to Dunmore East past the Flat Rocks and Shanoon to Dunmore East. An unforgettable walk.
Bus to Saleens and back to Dunmore. 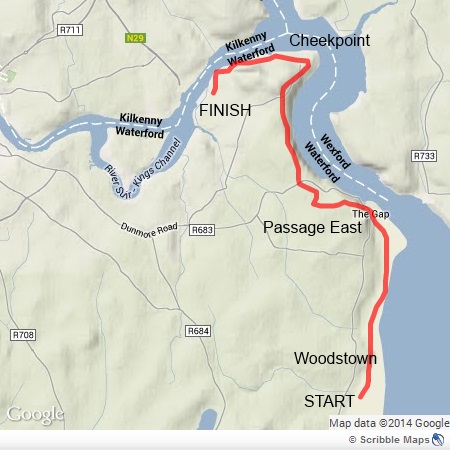 This route has so much more on offer than the absorbing story of the story of the Norman landings in Crooke in 1170 and 1171. Between Woodstown and Crooke in to the left of the road is the site of the never realised New Geneva, a dream of the late 1700s which included bringing skilled tradespersons from Geneva Switzerland and building a model town complete with University. The site eventually became a military barracks at the time of the 1798 Rebellion and is immortalised in the ballad, The Croppy Boy. The walk follows the seashore to the historical river fishing village of Passage East and then along the spectacular Hurt Hill track, high above Waterford Harbour to Cheekpoint. Hear about the villages which hosted at least three monarchs and provided the Norman gateway to Ireland. From Cheekpoint a change of scenery though the rhododendron woods of Faithlegg Hill to Faithlegg House. Not recommended for young children.
Bus to Woodstown and back from Faithlegg House.

An easy to moderate walk along beach, lane and field. Follow the ancient path to Creaden Headland and the 40 steps and hear the fascinating origins of the route. Legend makes it always a subject of intrigue and an invitation to delve into the history of smuggling, pilotage, and possibly even of other forms of trade including, according to some, the story of the slave trade. Local tradition has it that the 40 steps, a set of steps cut into the hard red sandstone conglomerate of Creadan Head is linked in some ritual way to the Giant's Grave (A Neolithic passage grave dating from around 2500 BC located at Harristown). Points of archaeological and historical and wildlife interest en route. Magnificent views of Waterford Harbour. Not recommended for young children.
Bus to Harristown and return Woodstown.

An easy to moderate walk with short strenuous patches. A ramble of great interest starting at Saleens Beach facing Tramore Sand Hills with a long beach section. The route takes you along the beach towards Brownstown Head, and a pause to enjoy the colourful flora and fauna of the tidal pools, will be a memory to take with you. Brownstown was at one time substantially populated and vestiges of the former village are still visible closer to the Head. The two pillars on the headland were erected following the disaster of the Sea Horse in Tramore Bay in 1816 with a huge loss of life. A track leads to the cliff top and on to Brownstown Head, a favourite stop of birdwatchers and whale watchers and the landmark twin beacons. Not suitable for children.